Stories behind the Shining Gems of AISSMS Institute of Management 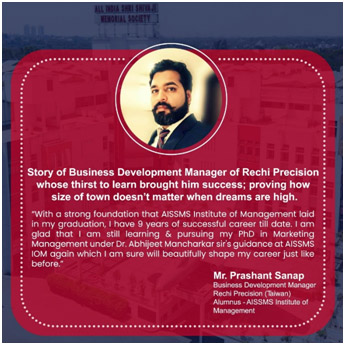 There is a quote from Swami Vivekanand – “The larger the struggle, the more spectacular the victory.” If you are not struggling in life then maybe you are on the wrong path. Alumnus of AISSMS Institute of Management Mr. Prashant Sanap believes in this saying and lives on it.An engineering graduate, Mr. Prashant was a very shy person when he took admission in AISSMS IOM. While taking this admission, there were many questions raised by his closed ones saying why to opt for a non-technical course after successfully completing electrical engineering; some even said to try for competitive exams or get any immediate job without thinking about the monetary benefits. Despite all the barriers, he chose what he really believed in, i.e. growth through education. He wanted to re-shape his career &firmly believed that PG in Management would definitely open the new doors.

“Education is the power that can never be stolen’’

Being a native from a small town, he started with a fear in his mind about living in a city like Pune. But the faculty & over-all environment of the college never let that fear stay. He was always encouraged & routed towards success which helped him gain confidence. He participated in all the curriculum activities which enabled him to find his own management skills.

The learnings offered by the Institute & the way he perceived them, together paved a good career path for him. He has worked in the Sales and Marketing field throughout his career of 9 years. Here is a look into his successful timeline-

He then opened his doors to learn about white goods market & connect with new customers. Within a year, he learnt so many new things about compressors and its industry as a whole, that he strives on the saying that ‘Learning is a continuous process’.

This is not the end though! Recently he has registered for PhD in Marketing Management and the most important aspect of it is that he is completing this research under Dr. Abhijeet Mancharkar, AISSMS Institute of Management itself.

He admires his journey from student to an alumnus to again a student at AISSMS IOM. He asserts that whatever he learned at this institute is priceless and is useful to at every step of his life and career. He adds how they entered as stones and came out as diamonds out of AISSMS.